The Home Affordable Refinance Program announced earlier this year promises to make credit available to millions of American Home Owners who have previously been left out of record low interest rates.

You can learn more about the details of this program in THIS POST from a couple weeks ago.

Here we’d like to discuss the merits of the program and not so much the details of the HARP Program.

While the HARP program is sure to be one of the most popular initiatives the Obama Administration has ever, or will ever, put into place, for the average home owner, it also could serve to solidify a bottom of the real estate market on a macro level.

As we discussed yesterday, it is starting to feel like we may just be bouncing off the bottomof the biggest home value depression in the history of America.

The HARP Program really could be “JUST WHAT THE DOCTOR ORDERED” in terms of digging out of the hole and starting our slow, and hopefully steady, ascent back to stability.

The Merits of HARP

The HARP Program has significant merit and I think the opening of the credit flood gates to RESPONSIBLE home owners is likely to be reflected on, in the future as, brilliant.

It certainly will serve as a legacy builder for Barak Obama, a legacy that is currently on the verge of being questioned, with the “ObamaCare” health reform bill possibly going to the Supreme Court for hearing.

The Merits of HARP are many however, there are three areas that can have a profound effect on the overall health of real estate.

1) Opens up rock bottom mortgage rates to a previously locked out, but incredibly important slice of the population

I apologize if this gets a little bit inside baseball. Again, if you are a homeowner and you have questions about HARP Qualifications please visit HERE.

It’s no secret that mortgage rates have been incredibly low, particularly during the last 24 months. The 10 yr bond yield, is the benchmark for long term fixed interest rates and has been for many years.

The previous multi-decade low, was back in June of 2003 when 10 yr Treasuries traded at an intraday low of 3.06 if memory serves me correctly.

At the time this post is written the 10 yr bill is trading at 2.12%, almost a full 1% lower than most home owners today ever remember.

This should bring an incredible smile to the faces of most borrowers however, very few home owners have been able to smile because they were simply not eligible for these low rates due to the fact home values have dipped so much they weren’t even going to waste their money on an appraisal.

If you aren’t agreeing with me there, take a look at the stock market when the Consumer Sentiment numbers are released from the University of Michigan. Bad numbers equal a bad market.

Real Estate won’t come back until, in quite simple terms, people are happy again.

HARP could make over 2 million people just a little bit happier. Believe it or not it will make a difference.

Part of the reason people are foreclosing is because they feel as though they have lost hope.

HARP won’t solve this problem completely but, it will minimize the foreclosures among the somewhat stronger borrowers who can now refinance. By giving these people the option now of reducing their monthly obligations we are now freeing up monthly cash that can go to actually buying things again.

A concept that many Americans haven’t been familiar with recently.

Hopefully some of this money does actually filter into the economy and doesn’t exclusively go into a savings account. Savings rates are higher than they have been in decades, the economy needs spending, spending that doesn’t involve the Government doing the spending.

Remember, I’m not suggesting that every borrower go out and “blow” the $250 per month they save on their mortgage payment via HARP, I’m speaking from a macro economic point of view. 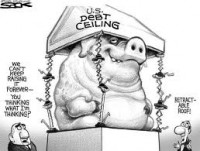 Adjustable rate mortgages have the potential of devastating America. Not all ARMs are devastating but, many of those loans that were made in 2004 thru 2008 are going to eventually come back to bite.

Interest rates and the indexes that ARMs adjust off have been incredibly low, but these indices are going to start heading north and when they do, they’ll head north in a hurry.

Inflation HAS to set in, not just a little inflation, rapid inflation, and when it does, popular ARM indices will sky rocket. The Governments involvement in money supply, absolutely dictates that this will happen.

One of the PRIMARY goals of HARP is to safe guard against a secondary housing collapse brought on in the future by ARMs that are getting out of control.

This is a very proactive piece of thinking not often seen out of the Federal Government. Again, if you have an ARM right now you’re having a good laugh but, laughter will soon be turned to sorrow if you miss the chance to move to a fixed rate soon.

HARP makes special provisions for borrowers who are underwater and have an adjustable rate mortgage.

Obviously the government is very conscious of the risk of inflation in the future. When the final arguments were being made for andagainst HARP, it was probably the future ARM situation that pushed HARP approval over the edge.

In my opinion HARP will, put smiles on our faces, make “foreclosure” a bad word again and protect you from catastrophic rises in interest rates in the future.

This 1-2-3 stimulus could be looked at in the future as the one piece of government involvement that actually helped instead of harmed.

What do you think is the biggest effect HARP will have?