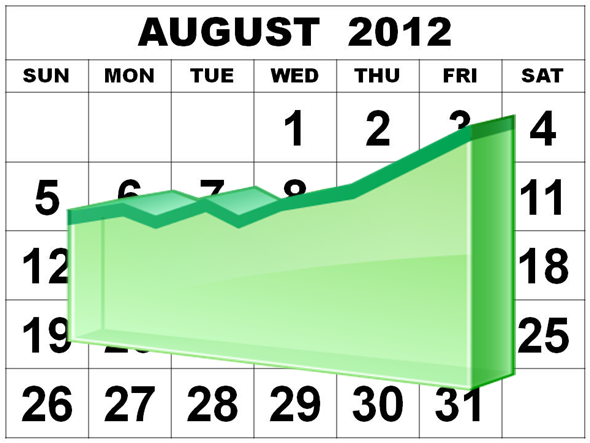 As was predicted by most economists who study the real estate market, August home sales were up.

What was not predicted is that August would post as strongly as they did, the 3.6% increase is the highest year over year increase in 6 years according to RE Data company CoreLogic.

August 2012 represents the 6th straight month with both month over month and year over year increases. Home sales outpaced July by 0.3%.

It is common for sales to be strong during the summer months and then begin to tail off around September. However, Corelogic predicts yet another increase in September.

Here is a chart that depicts 10 Years of HPI Data: 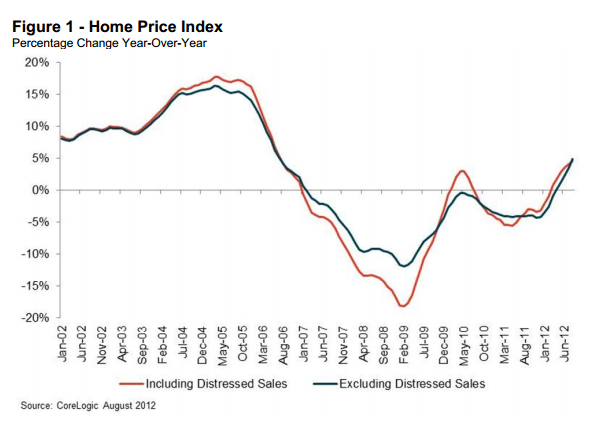 As is common, certain geographic markets are performing much better than others. There are 3 states which can call themselves home to the largest amount of distressed sales, Florida, Nevada and Arizona. The reasons for these massive levels of distressed property is the fact that these states have high concentrations of second homes and speculative building.

Here is a chart the depicts the 12 month Home Price Changes by State: 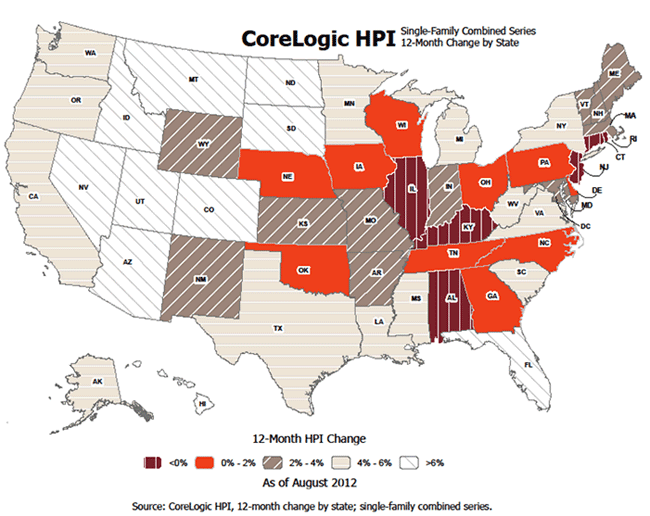 It has been well reported that the residential real estate market took an enormous hit with property values nationally deteriorating 26.7% from the peak in 2006 to 2012. Even with the most devalued states included, values have now rebounded to the point where we are only 19.5% under peak values.

The residential real estate market still has a lot of ground to make up. However keep in mind that values were massively overcooked in 2006 and normalization was an absolute requirement.

A key component of the recent recovery is aggressive interest rate reduction activities by the Federal Government. Mortgage interest rates are near record low levels hovering below the 3.50% mark for a 30 year fixed rate.

As of September 27, 2012 the primary mortgage market survey prepared by Freddie Mac showed rates on a national average of 3.40% for a 30 year fixed rate mortgage.

Have you refinanced yet?