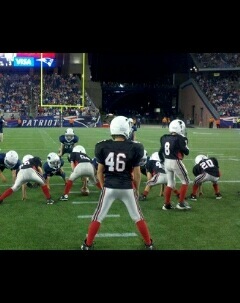 Monday evening (Sept 12) the New England Patriots will open their 2011 NFL Season against division rival Miami Dolphins, playing under new NFL Kick Off Rules. Bill Belichick trimmed the roster on Saturday and there were a few surprising cuts made. Veteran Running Back Sammy Morris was cut from the team as was perennial perceptional let-down Brandon Meriweather.

Meriweather gained a name in the NFL as being a bit of a headhunter after his highly publicized helmet-to-helmet hit on Ravens tight end Todd Heap last October. Even though Meriweather had an unpopular tenure in New England since he was drafted in 2007, he did somehow manage to make 2 Pro Bowls. Meriweather has been a favorite in terms of comical content for New England Sports Radio after he referred to British Landmark Big Ben as the “Big-Bang-Clock”. So long Bweather…

A somewhat surprising yet tactical cut was 3rd year wide receiver Brandon Tate. Tate’s dismissal had been eminent all pre-season by team insiders because of his primary role with the Patriots, Kick Off Return Specialist. Tate averaged over 25 yards per return last year, which was 6th in the NFL. 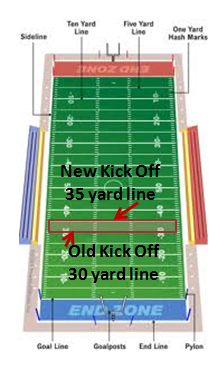 The new kick off rules in the NFL put less of a premium on quality kick returners. If you aren’t aware of the new NFL Rules regarding Kickoffs here is a brief summary:

The Objective of New Kick Off Rule

The objective of the new rule is to reduce the risk of injury during kick offs in the NFL. The theory lies in the idea that 250 pound men running full speed and subsequently colliding at full speed with other 250 pound men, is less than desirable and when these unnatural physical events can be avoided, they should be.

In essence, the NFL decided that they would like to see more touch-backs during kick off returns. If this was their goal, they have apparently achieved it. During the 2010 NFL Season roughly 16% of kick off returns resulted in touch-backs; during the first 4 pre-season games of the 2011 vintage that percentage doubled to 33%.

Some Fans Not Happy

Some NFL fans feel as though the New NFL Kick Off Rule will eliminate a very exciting aspect of the game. In the mean time, some sports injury specialists aren’t sure the new rule will have much of an effect. Regardless of which camp you’re in, fewer injuries = GOOD.