Was Age Restricted Housing The Problem? 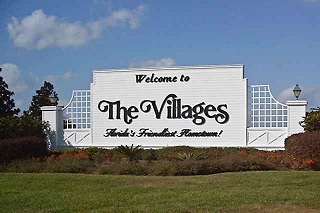 When considering home values, supply is at the core, as it is in most markets, this is no surprise. During the boom years 1998 through 2007, a significant culprit and usually forgotten in the discussion were, National Home Builders. While they rarely come up in the discussion, they certainly are some of the hardest hit, the assumption would be that they have learned a lesson.

I bring this up because as of November 2011, the Cost to Buy a previously built home is about to dip BELOW THE COST OF BUILDING a home.

Yes, the credit was there that allowed everybody to “move up” in terms of square footage, so the demand side was fueled artificially.

While I don’t want to make the case that home builders “shouldn’t have the right to make a profit”, they absolutely should, but a couple studies suggest they could have been a little more proactive or thoughtful when it came to creating massive amounts of bubble bursting supply in the market place. And Lawmakers played a significant role as well by literally giving National Builders a green light to flood the market with a previously unseen sector of supply.

Publicly traded home builders were under pressure to beat Wall Street estimates and they had fierce competition from local builders who seemed to have access to limitless speculative capital. Cities and towns were anxious in many cases to bring in tax dollars and 40B projects were practically impossible to stop, from an entitlement standpoint, at a local level.

While the rest of this was going on, there was an entirely new breed of projects being built: Age Restricted Communities.

Similar to 40B, they were also very hard to deny locally and they were practically irresistible to municipalities. An age restricted project or “55+” community is viewed as irresistible, because a town would practically be guaranteed a ton of tax revenue and NO strain on the local school system.

Prior to 1995 laws required that Age Restricted Communities achieve very special permitting as well as contain special amenities and facilities in order to gain the nearly “exempt from entitlement” status.

In 1995 the law was amended and the amendment allowed for a free-for-all in the Age Restricted supply channel.

What are the effects of this new type of inventory?

The State of New Jersey alone reports an inventory of 17 years of supply in age restricted housing. Many other states report similar numbers.

A Paper written by the New England Economic Partnership found this:

“Using age restricted housing to reduce the number of school children cannot succeed. The total cost of running a school district IS NOT materially affected by year-to-year fluctuations in the number of students.”

The NEEP goes on to say that no thought was put into the essential need for younger skilled labor and Age Restricted housing directly stole from 40b affordable housing projects, as large home builders expected a higher net profit in 55+.

The NEEP directly attributes age restricted housing to raising the median age in Massachusetts by 5.3 years from 1990 – 2006, while the national average was only 3.6 years. This paper can be found on the Federal Reserve Bank of Boston website.

An Award Winning study was written in 2010 called:

“Another Look at Effects of “Adults-Only” Age Restrictions on Housing Prices”.
This study isolates the hardest hit areas of the home valuation crisis. The study reports that the direct impact of Age Restricted Projects in Broward County, FL on home valuations was -22.9% during 2005 and 2007.

Not only did the new form of supply unintentionally pump overall home values on the way up, the study concluded it had an equal and opposite reaction on home values during a downturn.

In each and every instance where they found the 1995 Amendment artificially spiked the number of AR units, they also discovered the most drastic swings in values both up and down.

Even more compelling is that this was predicted n 1997 by another study by Do and Grudniski. The 1997 study concluded that the AR law change would have an adverse effect on home values with an overall negative affect in a downturn of 6% nationally. 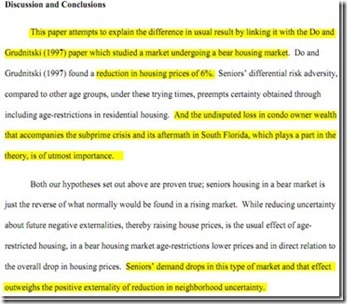 There is no reason to point blame at Seniors who took advantage of the 55+ lifestyle, they were not the problem, they were given another option and they took it in many cases. The convenience of onsite activities and single level living was quite the draw.

The municipalities hardly fought this piece of supply, they were sold on the idea that an increase in tax revenue sans strain on their school system would be a windfall.

The home builders were given a green light, we can’t put all the blame on them either.

The blame for this particular exacerbated portion of the downturn, lays squarely on law makers who failed to see the possible affects of Age Restricted Communities and the lack of normal entitlement governance, a conventionally permitted community would have to undertake.

It may not seem like the entire crisis could have been averted by not amending this law but, take this into consideration, just theStates Mentioned in this article NJ, CA, FL, AZ represent 24% of the entire US Population and nearly 27% of all US housing supply.

If values in those markets alone had dipped a mere 10% less and nationally, values had dipped only 6% less, both incredibly conservative numbers based on the studies mentioned, we may have only suffered a downturn but not a historic meltdown.

Another Look at the Effects of Age Restricted Housing online at Fullerton Business School or Download Here.